15 things that surprised me while living in South Korea 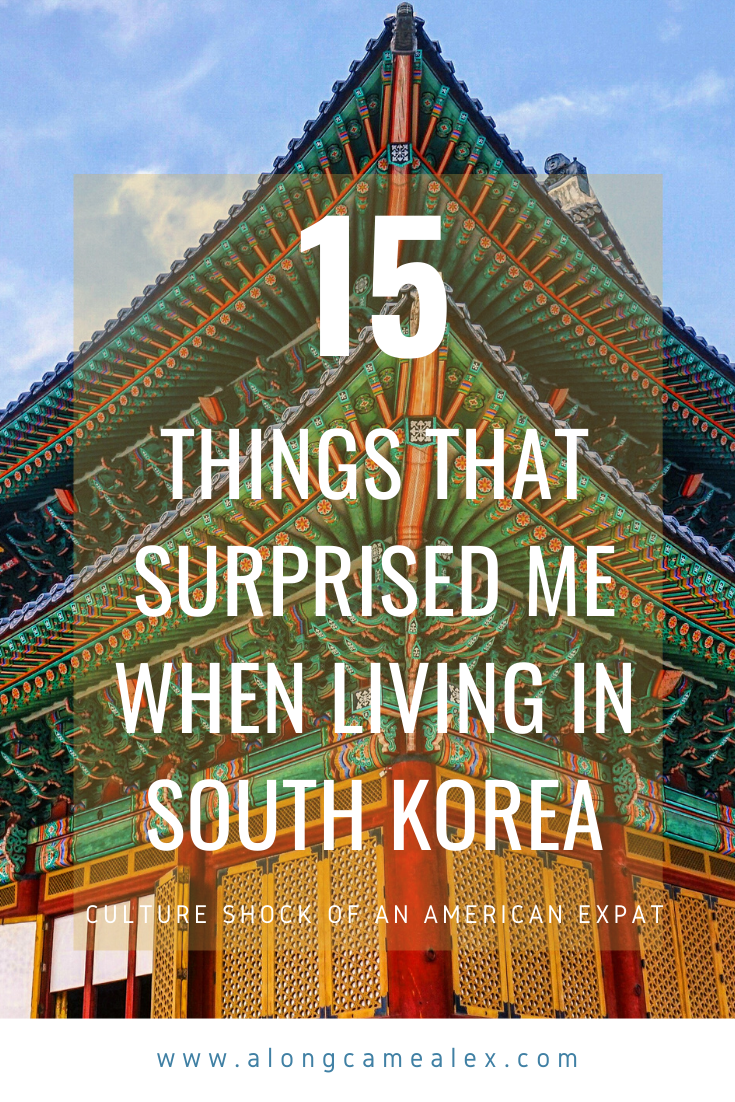 At the age of 23, I boarded a 14 hour flight from east coast USA to Seoul, South Korea. Knowing almost nothing about the country, I knew I was bound for a culture shock, but after living there for two years, these are a few things that surprised me the most:

One of the biggest differences I noticed right away was how conservative South Korean women my age can be with their makeup style and their clothing. If I ever wore v-neck shirts, sleeveless or off-the-shoulder clothing, I would get judgmental stares from the older women.

Similarly, South Korean women wore pinks, reds and coral lip colors so when I was used to wearing Mauve and Brown shades that are trendy in the US, women were pretty shocked!

Needless to say, my sense of fashion and makeup preferences that favored a Miami, Florida vibe were not well received on the metro in Seoul.

All the napkins and cups at restaurants are a third of the size as the ones given at a restaurant in the states! The tiny napkins are super duper thin and not at all what we’re used to.

The public transportation in South Korea is INCREDIBLE. Extremely convenient, inexpensive and incredibly easy to use. There were multiple apps so I could configure the train and bus schedules in English. I could buy my train ticket into Seoul for under $4 completely online from my phone. Realistically, I could get to about 75% of the entire country using public transportation without an issue.

South Korean people really care about what they look like… so much so, that they wear curlers on their bangs or masks to hide their new “work” on their Metro commutes; a concept I still do not understand.

You can’t easily find trash cans anywhere, not even in subway stations! If you purchase a bottle of water, be prepared to hold onto it for decades. However, I never saw a single person litter while I was there. They’re also extremely particular about the recycling and you have to separate each item into 5+ separate bins of material, which created really good habits for me.

In South Korean culture, writing someone’s name in red ink is a huge no-no! The color is associated with death and red ink is used to record a deceased person’s name in the family register.

To put it simply, South Korean people drive WILDLY. Red lights, at least in my little agricultural city, were definitely more of suggestions. I became a much more offensive driver in Asia.

Café or Coffee shops in South Korea are no joke! The aesthetic shops are filled with themes, picture opportunities and desserts so pretty they don’t look edible. The locals will spend hours chatting with their friends and taking photos here.

In South Korea, it wouldn’t be uncommon to see men with Mickey Mouse tote bags, a hoop earring or other jewelry and things people in the USA might deem a little too feminine. I loved this. From an outsiders perspective, I felt it was liberating. Related to this, couples in South Korea often wear head to toe matching outfits, hats and shoes included! I’ve never seen anything like that.

I was elated to find that almost all South Korean people under the age of 30 have a very good grasp on the English language. That being said, I was tricked once or twice. A South Korean person may know many English words and how to pronounce them, but they don’t always speak English sentences correctly. Totally understandable! It can just get a little tricky at times. For example, a lot of South Korean people would answer “yes” to a question that required and actual answer or use the word “impossible” to mean more of inconvenient, against the rules, unauthorized, etc.

See use of the word “impossible,” which we all heard very frequently. Plan on eating your meal as it is listed on the menu.

I’m not sure if you know what this mean… but it’s basically a very loud way to clear your throat of phlegm & spit it on the street. These loogie hacks are 100% socially acceptable and frequently done on the street next to innocent passersby and it seems no one cares.

One thing I noticed is that people carried around tooth brushes that they’d use after eating meals. People frequently retrieved a tooth brush out of their bag to brush their teeth in public restrooms.

However, upon washing their hands, South Korean people often flick their hands dry at the sink, instead of using a hand dryer or a paper towel. I’m not sure the reason of this, or even if anyone’s aware, but it always, without fail, left all bathroom sinks/counters/mirrors saturated with hundreds of tiny pools of splattered water.

In the states, if I wanted to grab some Chipotle after shopping, I am free to do so alone without any cultural faux pas. This concept of eating alone is far less common in South Korean culture. The mealtime is a lot more family/socially orientated and it’s hard to always find somewhere that will even serve you if you are by yourself.

The people of South Korea touched my heart in a way that I will never be able to explain. Strangers on the streets from completely different backgrounds, ethnic cultures and upbringings showed me a warm love. The older women corrected me on how to eat my food. The older men gave me directions using charades.

I lived in their beautiful country for two years and I wouldn’t trade a single second. I will forever be grateful to have been so pleasantly surprised by the country of South Korea. Until next time, “kamsa hamnida,” Korea.

48 hours in Jeju Island, South Korea
How to Spend a Long Layover in Kuala Lumpur, Malaysia
How I got my Chinese Visa from South Korea
Ultimate Dublin Guide: What to Do
Boryeong Mud Festival 2018