An Ultimate Travel Guide to Austin, Texas: where to eat + what to do 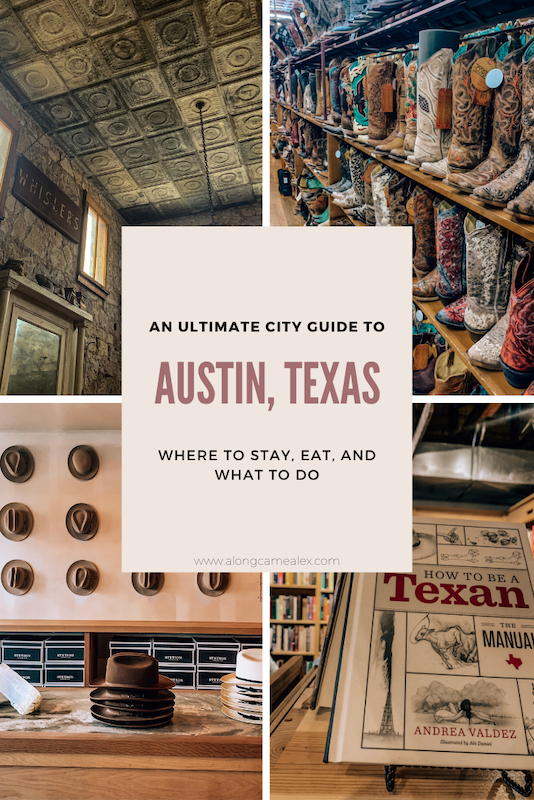 If Seattle and Nashville got married and birthed an LGBT+ child, it would be Austin, Texas.

For as long as I could remember, I had wanted to visit Austin! Having been to nearby San Antonio when I was about 19, I got a tease of it. Going to Austin City Limits my first year back in the United States was the perfect opportunity! I got so many recommendations for things to do and eat so I’ll lay them all out here:

First things first, but I’ll keep it quick: in my opinion, I would stay either Downtown, near South Congress or in the East Cesar Chavez area. If you’ve never been, Downtown is really your best bet!

we spent hours walking around the “eclectic” shops here & it’s a total must do!

Some of my favorites:

One of the most iconic and largest western stores in Austin with over 4,000 pairs of cowboy boots, which is the largest selection under one roof in the world

This was one of the prettiest store I’ve ever been in! They shape and customize stetson hats in store and sell other goods such as crystals, gem rollers and more.

The HOPE Outdoor Gallery AKA Graffiti Park started as a temporary project at SXSW in 2011, but it became so popular that it recently was permanently closed. No need to fear though: they’re opening a new version near the airport that will add parking, bathrooms, a cafe and art classes.

SXSW is South by Southwest, an annual modge podge of film, interactive media, and music festivals and conferences. The ten day conference “an opportunity for global professionals at every level to participate, network, and advance their careers,” but it’s also a chance to have fun and discover new musicians as well! As an outsider, this event really seems to describe the culture of Austin in a way! SXSW takes place in Mid-March.

The live music scene in Austin is one of the largest in the country. Some suggestions to listen:

So, people are passionate about the food in Austin, which I loved! I got sooooo many recommendations for food and a lot of them overlapped. I only had time for a few brunch spots but everything I tried, I loved!

Order the Migas Kolache!! Potatoes+queso+bread… I’m still dreaming about it.

Where I’m saving for next time:

Thanks for reading and I hope you find this helpful! Enjoy your trip & happy traveling!

*Special thanks on this post to IG @terra_eats_the_world for a few local recommendations as well! *

Taipei's Addiction Aquatic Development 上引水產
Our Must Eats: Tokyo
A Kyoto Quick Trip!
How I got my Chinese Visa from South Korea
Parisian Photo Diary