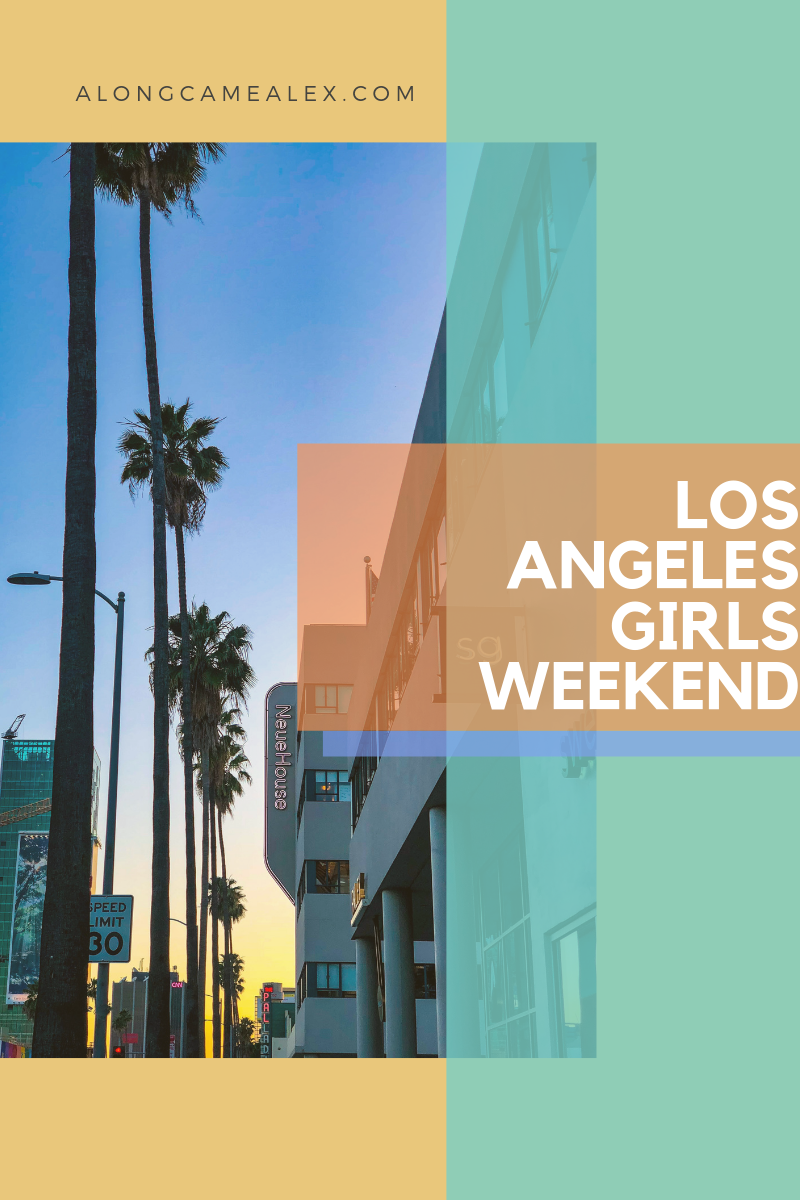 For my birthday this year, I wanted to do something glamorous with some girlfriends. After some deliberation, the City of Stars was decided on! LA LA LAND, here we come!

We had an extended weekend (late Thursday night-Sunday afternoon), so here’s what we did:

Against every blog post I read, we decided to rent a car for the weekend. Through Hertz, we were able to secure a decent sized vehicle for $110 for the entire trip. Split three ways, we figured it’d be worth it considering we were doing some bigger ventures (Disneyland, Malibu, etc.)

It was totally worth it! I don’t know how we would’ve been able to afford ubers everywhere

That being said, I took my rental and headed straight to Élephante Beach House in Santa Monica for a classy, trendy reunion with my girls. Drinks were expensive, but delicious and so was the food! It was a perfect little glam arrival to the city, but make sure to make reservations ahead of time.

Next, we walked the Santa Monica pier which was kind of peaceful at night with the ocean breeze/without the crowds! Then, back to our West Hollywood Air BnB for some shut eye.

We hiked the Hollywood Sign and to this day, I still can’t tell you which park we were ate/how much we hiked. All I know is that you could see the Hollywood sign from where we parked but we were strolling for a good two hours, by choice. The California weather was pretty & all the trails we took were paved.

After we showered post-hike, we headed out to Venice for lunch & an afternoon adult beverage in the sun at Waterfront Venice. There’s a parking lot nearby with $10 flat rate parking, which was fair since it’s right on the water! It’s probably more packed for dinner, but I kind of loved that we had it mostly to ourselves.

About a fifteen minute walk from the boardwalk is, in my opinion, a must-do when you’re in the area to stroll the shops of Abbott Kinney. Named “one of the coolest blocks in America” by GQ, AK is packed with tons of quirky boutiques, brand name shops, cafes and more. Try Salt & Straw ice cream or a Cha Cha Matcha Latte while you’re there.

We cleaned up and headed to the entirely Vegan Mexican Restaurant in Hollywood. We were in LA during Pride so it took us about three times as long to actually get there. I thought the food was really good & the atmosphere was neat. Try to sit outside if you can!

last few hours of being 25!

I’m a Florida girl/Disney freak. Before this, I had been to 7 out of 11 Disney parks globally… that being said, I needed to devote more time to the OG park than we did because we didn’t have time for California Adventure and my heart literally shattered into a million pieces. Already planning the next trip!

We didn’t stay long in the park, so we headed to a few cute and trendy pop-up shops on the way home afterwards including Glossier and Naked Wardrobe.

Dinner at TAO & drinks around there

We got ready and had a late apps, drinks & dessert at the Asian influenced restaurant TAO. It’s expensive, but it was a special occasion for my birthday! Perfect for a glamorous girl’s weekend. Make sure you make reservations.

Okay, adorable little shop in the heart of Beverly Hills and their bagels were actually phenomenal! I think their main location is on Melrose, but we were going to BH anyways so this was a perfect little stop for us.

On a Sunday around 11, the area was pretty dead, but it was pretty to look around and stroll the clean streets.

We had the option for one more activity before we had to go to the airport and cruising the coast won! It was worth each one of the 60 minutes of drive through the Santa Monica Sunday Summer traffic.

Walk the beach & pier at Malibu

What a perfect end to the weekend! We soaked up the sun, squished our toes in the sand and got an ice cream snack on the pier.

Thank you so much for reading & don’t forget to check out the highlights docked on my instagram @along.came.alex for video footage of the trip!

I’ve had a crystal clear & unwavering plan for t